Start a Wiki
watch 12:14
Battleborn: Incursion Let's Play
Do you like this video?
This strategic competitive multiplayer mode drops the player in the middle of a war zone with a simple objective: Driving minions into enemy territory to find and destroy their two Sentry Bots. Meanwhile, the other team is aiming to do the same exact thing, so the game quickly becomes a balancing act of defending territory and escorting waves of minions on the assault.

The path to victory is paved with opportunities for strategic players to take advantage of their environment, such as recruiting powerful Thrall mercenaries to fight for your team, or using Shards to activate buildable tactical structures, including Automatic Turrets to attack the enemy, or Healing Stations which regenerate health over time for the team that activates them. Team composition is also critical, and although offensive attackers are important, a good support or healer can be vital to keeping teammates in the fight for the last star in the universe.  There are three maps for this mode.  They are Overgrowth, Echelon, and Monuments.

Keep your eyes on the prize. Although kills will grant you XP, your primary targets are those two giant enemy spider Sentry Drones on the other side of the map. The first enemy Sentry Drone sits just past the midfield point of the map. The second, bigger Sentry Drone is situated at the far end of the map near the enemy team's base. Destroying the base Sentry Drone ends the game. Each Sentry is marked with a shield icon on the mini-map. Destroy small and large Shard clusters to collect Shards. Small clusters are available at the start of the game and large clusters spawn after two minutes then respawn two minutes after being destroyed. Use Shards to purchase buildable tactical structures which are located strategically around the map. These buildables can then be upgraded using Shards to make them more efficient and more resistant to enemy attacks. Buildables will be available to purchase again approximately 20 seconds after they’ve been destroyed. 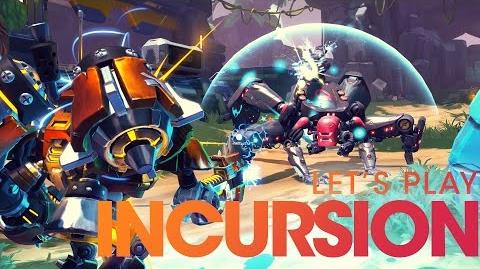 Battleborn Incursion Let's Play
Add a photo to this gallery

Retrieved from "https://battleborn.fandom.com/wiki/Incursion?oldid=13116"
Community content is available under CC-BY-SA unless otherwise noted.