Start a Wiki
watch 01:12
Battleborn: PSX Trailer
Do you like this video?

Battleborn is developed by the teams behind the critically acclaimed hybrid role-playing-shooter series Borderlands, and is an ambitious fusion of genres. The game combines highly-stylized visuals and frenetic first-person shooting, with Gearbox’s industry-leading co-operative combat, and an expansive collection of diverse heroes. Battleborn is set in the distant future of an imaginative science-fantasy universe where players experience both a narrative-driven co-operative campaign, as well as competitive multiplayer matches.

Battleborn is a hero-shooter that fuses team-based first-person shooting with a deep roster of playable heroes. No two heroes play the same, and each has unique weapons, powers, and personalities that can be fully experienced in cooperative campaign mission, or over the course of a single competitive multiplayer match.

Battleborn’s story is set in a distant sci-fi fantasy future, where all but one star in the universe has gone dark at the hands of the vicious Varelsi. A single solitary beacon of hope remains – the last star, Solus. In the wake of the chaos, different species of survivors take refuge in the Solus system and form five factions based on their beliefs. Heroes called battleborn emerge from each faction and fight for what little resources are left in the system. Now, the Varelsi are threatening to finish what they’ve started, and only a united team of the universe’s most powerful heroes can stop them.

Play through repeatable Story Mode episodes to save the last star in the universe from Rendain and the Varelsi. Here’s a few things you can expect as part of Battleborn’s Story mode:

Before the Battleborn joined forces to save the universe, they fought amongst themselves for the few resources that were left. Team up with other players to battle on three Competitive Multiplayer modes, Incursion, Capture, and Meltdown.

Battleborn’s Season Pass costs $19.99 and will net players all five packs for the price of four. Players can also pick up the Season Pass as part of Battleborn’s Digital Deluxe Edition, which includes the base game, the Season Pass, and some bonus cosmetic customization for $74.99 – which saves $10 in total compared to purchasing everything separately.

Battleborn has a huge variety of skins and taunts that come with the game at launch, and more cosmetic customization will be available post-launch. Some of these will be sold in-game.

The Solus System is vast and the battleborn will find themselves in conflict on the different home worlds of each of the five factions, and different locations within each world, called zones. Each world comes with its own unique look and feel and strategic environmental nuances. Here are a few examples of these worlds/zones.

Development on Battleborn began as early as the end of the development cycle of Borderlands 2. Studio head Randy Pitchford, art director Scott Kester, and a handful of other designers to sketch out something like a space opera; a pure sci-fi game. The team wanted an impossibly large cast of characters, each with their own identity, background and story. Initially Gearbox wanted Battleborn to have a more realistic look, but as Kester began sketching more and more colorful individuals, the team gravitated towards the new look. Gearbox staff has referred to the initial conception as "Ender's Game meets Heroscape." Writer Aaron Linde spent the better part of a year researching the inevitable heat death of the universe. It was decided that the game would be a mix of Gearbox's usual tropes with real-world science, along with the nature of futility. The team came away with a story about heroes fighting to save the last star still aflame, and decided that the best way to accommodate so many vying personalities was to create a TV-show-like template for unraveling the tale, something more akin to an episodic game than a full campaign.[2] 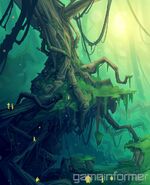 2K Battleborn WolfSentryCoop.jpg
Add a photo to this gallery

Retrieved from "https://battleborn.fandom.com/wiki/Battleborn?oldid=7622"
Community content is available under CC-BY-SA unless otherwise noted.