Attikus and the Thrall Rebellion

Attikus and the Thrall Rebellion is a Story Operation, which was released with October 13, 2016 update.

"It's the kinda night the whole planet's looking to chew you up and use your femur as a toothpick.
Tempest... a giant fist hanging in space, in search of a face to punch. Maybe mine.
But somewhere deep in this city, there's another fight brewing."
– Attikus

This operation explores Attikus' account of the Third Thrall Rebellion. The ultimate goal of each story is to defeat the Silent Sister Aria, demonstrating Attikus' strength and allowing a portion of the thralls to break away from their control and join the rebellion.

In this operation, there are a total of 24 side objectives. However, the player will only have to complete four randomly selected objectives within a single run-through. Currently, a couple of the potential objectives are missing, so they are not listed below.

Poster by Seung Kim[3]
Add a photo to this gallery 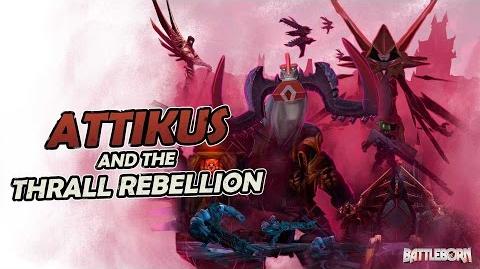 Retrieved from "https://battleborn.fandom.com/wiki/Attikus_and_the_Thrall_Rebellion?oldid=15764"
Community content is available under CC-BY-SA unless otherwise noted.